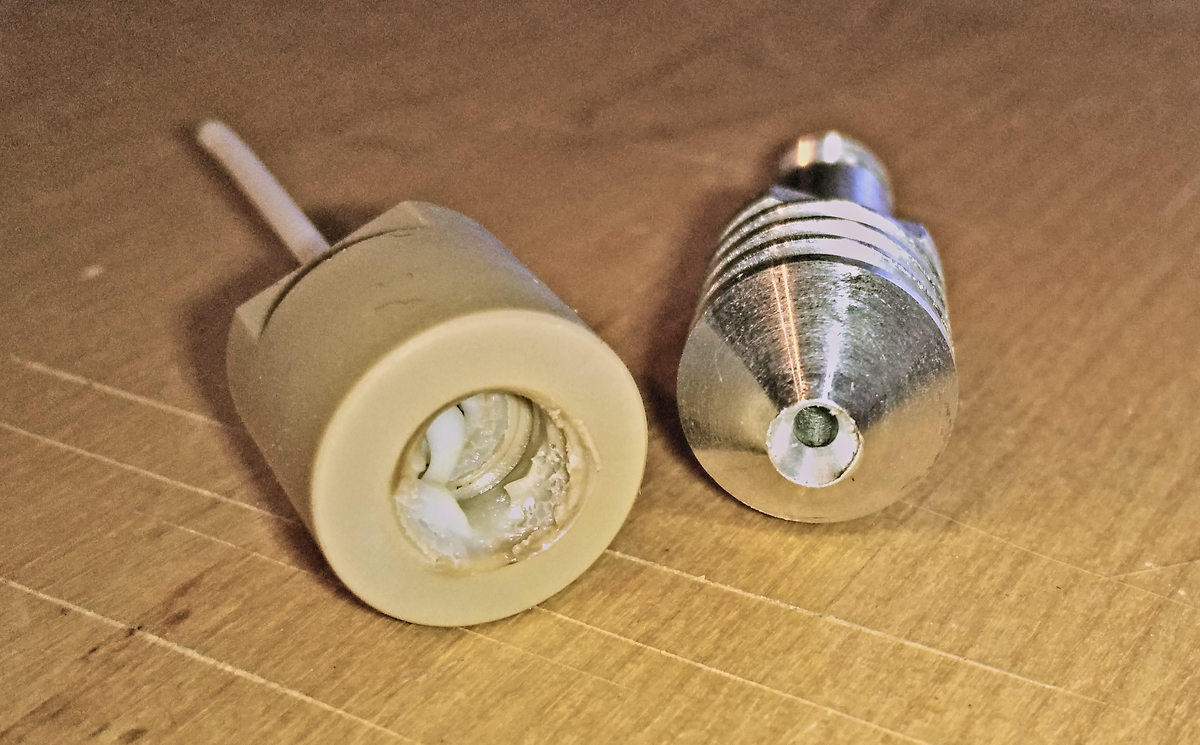 Since the VFCC already offers all the features needed to store, retrieve and visualize all metrics of the 3D Print Robot, it was only a matter of an hour to install and configure collectd on the Odroid C1 to gather all system and printing related metrics, ship them into InfluxDB and mash up this fancy Live - F3l1ks - 3D Print Robot Stats Dashboard 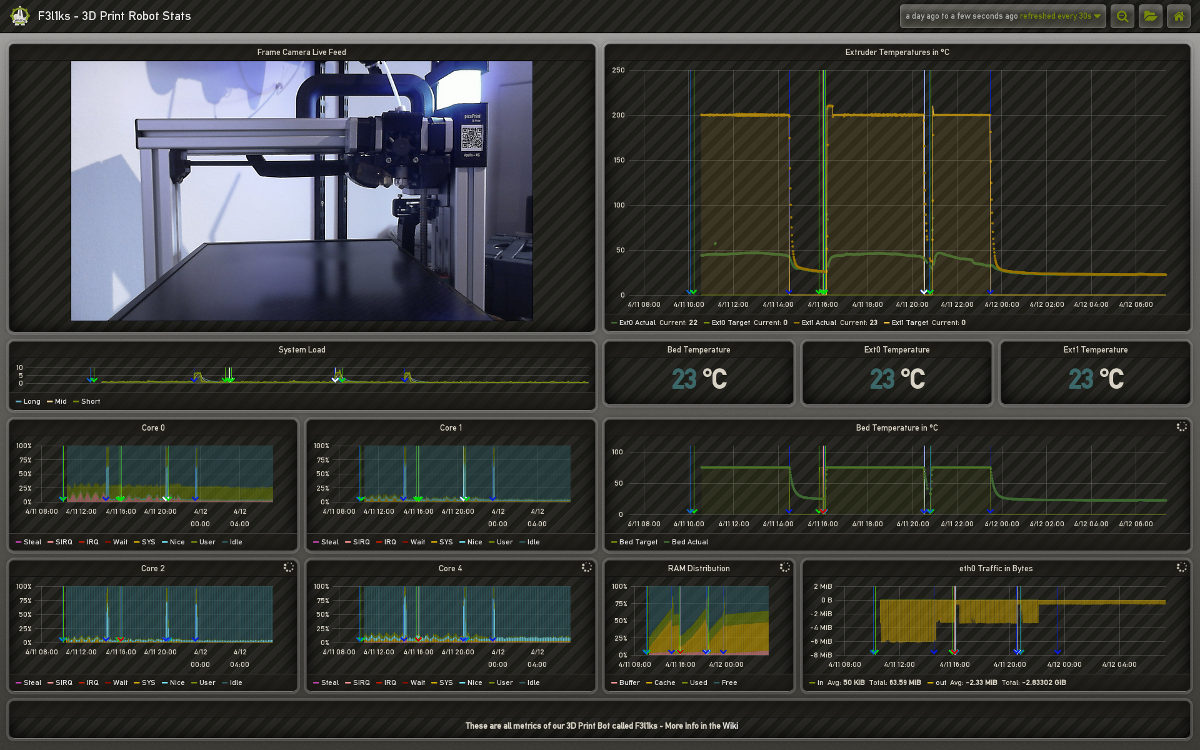 Check out the virtual-flight-control-center-opened Mission-Log, if you want to learn how to build something similar with open-source components yourself. In this case, collectd was chosen as the only collecting agent to run on the Odroid C1. It collects all high level related metrics with its own plugins and the temperatures are collected by the exec plugin, which calls octocmd - a console interface for octoprint - wrapped by a quickly hacked shell script.

In order to get the data from octoprint you can use octocmd on the console. Install and init (as the user that is calling it later, in this case collectd) according to documentation.

Put this into /var/lib/collectd/scripts/octotemp.sh or where ever you want, just make sure it's the same path as in collectd.conf and that is has the execution bit set:

Great post guys, love the VFCC and the logical ways its laid out.

As for the peek Hotend, I replaced my stock Felix with the Sateors carriage and E3DV6 and now regularly print at 280DegC no problems at all. Worth going from 2 extruders (that were never properly used) to 1 extruder that is super reliable.

Sweet, thanks for that positive the Feedback, it's good to know that it's possible to inspire new ideas and concepts, even sometimes entertain, so that the time, that went into it, was well spent and serves a purpose.

I think I've already seen your E3DV6 hack in the forum and I loved it, especially the all-metal implementation and that wide temp range that comes with it.

I'm still waiting for official feedback about the maximum temperature of the Felix V4 because I was really starting to get the hang of having two extruders and wanted to master the art of dual extrusion next and AFAIK, bowden extruders don't handle flexible filament very well (like arnitel or ninjaflex).

Please correct me if you've made different experiences because we have a couple of projects that already need some printed parts made out of flexible polymer, noise/vibration dampeners for the APU and the hexacopter drone for example…

I found that using the dual head to be inconsistent, and alignment height wise and X+Y is a pain at the least. Did you see the new Diamond head on Kickstarter that utilises e3D, this may be a good alternative? looks very promising for multi colour/materials without the other problems, just need to get a mount designed for the Felix. Would be nice if new version of Felix used these as official extruders. these hotness will also go up to 400DegC but need thermocouple installed, will be great for Polycarbonate, Ive tested with PC and is just not hot enough at 295DegC and layers do not adhere well enough.

Just a correction I didn't create the Ed3 hack, that was Satour, I've just utilised it and have found it very reliable compared to the Official Felix.

Yes I also was looking at printing dampers etc for the drones with ninja flex. Printing Ninjaflex is pretty fiddly work and requires some experiments to get reasonable results but works well with the e3D and bowen with retraction disabled and low feed rates to get around the ultra flexibility of the ninjaflex. printed very slow. The NinjaFeet I designed and put up on the forum took ages to print, but work really well as dampers. http://www.thingiverse.com/thing:700228 and you can see print settings I've used that work with the E3D

I did experiment when I had my dual original extruder setup of ninja flex and PLA. I designed up a test part of PLA then ninjaflex then PLA, with the view of ultimately using a similar design for QUAD anti vibration mounts for the flight controller. Tests were promising, however biggest problem is alignment and dual extruder oozing. PLA and Ninjaflex stick really well together.

Ohh, these dampeners look great, since the original self-adhesive rubber feet tend to fall off often I'm inclined to test your approach and will make this the first ninjaflex experiment. Alternatively there is also some arnitel here, which has never been used, any experience with that?

Luckily, I will get some ninjaflex tomorrow (nice timing) but I still have no feedback yet, what the maximum temp range of the Felix V4 hot-end is supposed to be. They're specced from 0 to 275degC according to the shop, but I'm a little hesitant to try 260°C now because then I would have no hot-end left if this one melts down too :/

Don't worry, I didn't mean “create” but I think I saw some pictures of YOUR implementation before, see Learning to build a simple metric scraper robot for my take on originality and all this old-think junk :) So in terms of bowden, where do you see the advantages over Direct-Drive?

Seems we're having a couple of common/intersecting interests, so I really enjoy the exchange. My needs for dampeners are exactly the same. I haven't gotten as far into dual-head printing to run into oozing issues yet, because I was just at beginning/testing/playing level when ext0 had its meltdown. BTW, have you tried PET yet? I'm still trying to find more alternatives to PLA that are food-safe for projects like the SEEDStack (also on thingiverse)

No sorry no experience with any of the other filaments other than ninjaflex.

From the store it looks like that the V4 hotend is pretty much the same as whats being sold now and no I wouldn't trust them at 275DegC, my personal feelings is the design is flawed where its pretty well documented on the forum the Jams that occur internally where the Peek/metal meet, I used to experiences these from time to time and of course not the easiest things to maintain/dissassemble, which if done puts your calibration out if using 2 extruders. Honestly I've not looked back since going to E3D, not a single Jam. I'm very keen to try out the new E3D cyclops (http://e3d-online.com/Cyclops)

I've not yet played with PET, there is new food safe filament I read about yesterday and am keen to experiment myself, especially with the glass properties of it http://www.fabbaloo.com/blog/2015/4/12/formfutura-releases-hdglass-filament

With the Bowden, like Direct drive, there are pros and cons with each, its very easy to change filament with Satours Bowden drive, Lightens the head so lessens the ringing on x Axis and allows faster prints. Hotend maintenance is very easy with his design, with bowden you can also add a heavier geared Stepper for faster prints. Cons flexible filament is harder to print, but you can work around this as I've done. Also more retraction is required for normal filaments, I'm using 3-5mm but this is not a biggie.

The Kraken looks also quite interesting, perhaps a combination of the Kraken base, two single nozzles and one cyclops nozzle will give the most flexible configuration for any kind of printing requirements. As for the V4, apart from the meltdown I never experienced any jam/clogging issues. All metal design and stainless steel nozzle availability are clearly attracting me towards E3D… Maybe in the next update sprint/budget planning :)