The Auxiliary Power Unit (APU) is the fourth column in the group of independent and mobile energy sources. In case of over-budget power demand or a longer period of heavy weather (no sunlight for days), the APU will supply the batteries with power, generated by a small internal combustion engine. 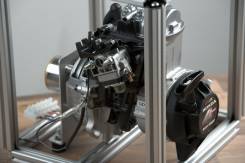 The system itself is pretty simple: A very small 4-stroke gas engine with 25ccm and about 0.7kW/1HP output power drives a brushless motor that is acting as a generator and converts mechanical energy from the motor's shaft into electricity by rotating strong neodymium magnets around coils. At the time being the APU is fueled by gasoline but the final goal should be a complete conversion to a mini wood-gas block cogeneration plant, combusting biogas to get 350W peak power output and warm water as well. And of course, it's a nice hacking platform for 4-stroke engine designs, to see which fuel solutions might also be usable.

Design goals of this setup

Fortunately, others were already looking for a similar solution and documented their results free and publicly-accessible, which resulted in an enormous amount of feedback and successful follow up builds. It's the perfect example for the speed, individualism and reach of an uncontrolled, naturally established peer2peer product life-cycle, that we may begin to see more and more often.

For this prototype, a Honda GX25 engine was chosen, although a Subaru/Robin EH025 should be comparable and easily adaptable. The major difference between these two engines is the way the valves are controlled:

If you are having trouble getting the GX25 engine for a good price, start thinking out of the box: These engines, when bought as a single unit, seemed nowhere available for under 300EUR, but you might want to look for Honda UMS425 motor trimmers - which basically have the exact same engine, this one used to be an UMS425 too :) 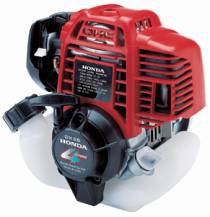 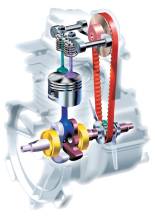 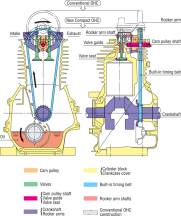 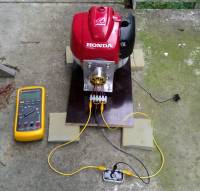 During the first run on the test-rig it was clear, that the Honda GX25 still is too noisy. So the first modification efforts will focus on the development of a new muffler, a new air-intake/filtering system and a fitting case, with a dampening rig for the GX25 and additional dampening material on the outer walls.

These are the unwanted parts, that are already ripped off the Honda GX25, to reduce weight as well as to remove parts which didn't perform well or could easily cause vibrations and other stuff that generally won't fit into the new case. 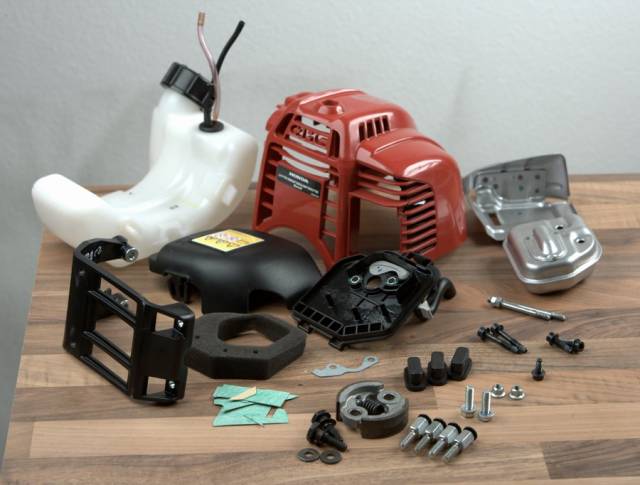 If you are in need of any of these parts, just drop a note, it's very unlikely that these will ever be in the somewhat more final design, so these resources are free to share.

The original Honda GX25 “Tin-Can” muffler is already removed and will be replaced by a new 3 chamber muffler for better sound suppression. The goal is to reduce the sound emissions of the APU by building a muffler specific for this engine size and to prove DIYability of the concept. Not to mention, getting some sound suppression and hard soldering skills for free on the way.

Having more muffler volume seems to increase the dampening effect but the room available for the muffler within the case is constrained to 6cm max. in diameter, the height may vary in between 18-22cm. This lead to the following muffler dimensions, in order to get a muffler volume of almost 600ccm, still fitting in the case and having a 1:23.75 displacement to muffler volume ratio. There seems to be a commonly referred butter zone for this ratio in the range of 1:13 to 1:24, so this design may just work pretty decent:

This seems to be the best source for inox pipe: 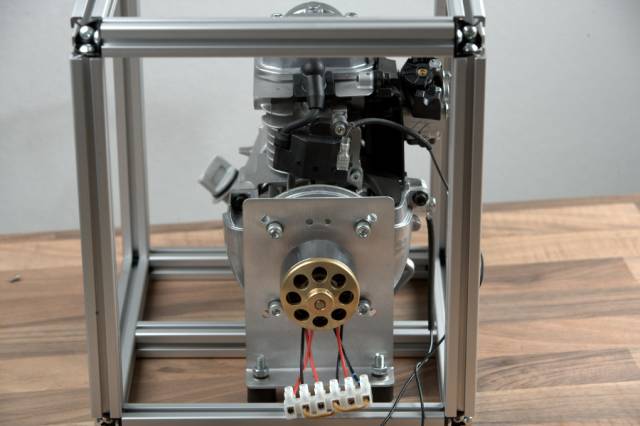 Torcman manufactures two of their brushless outrunners to be used as a generator, specifically tailored for the GX25 and the GX35. They also offer a complete, almost-ready-to-use-kit for both engines, in case you don't want to hack your own. The following configuration represents the latest specs of a brushless outrunner, to match the optimum torque and RPM of the driving engine to maximize output efficiency. 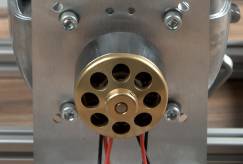 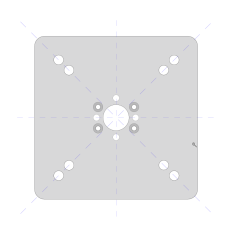 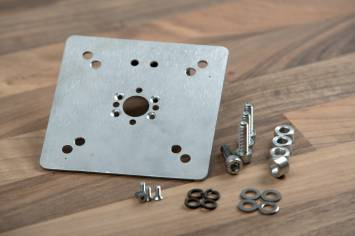 The frame for the casing is made out of type 5 extruded aluminum profiles (20x20mm): 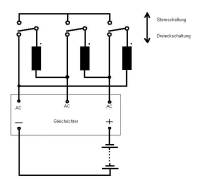 As soon as the basic mechanics are working and the sound suppression/boxing is done, development focus will shift to the Generator Control Unit.

The choke originally was just a small plastic lever (grey), covering the hole leading from the air-filter box to the carburetor inlet (you can see it in the removed parts picture). This plastic lever has a small hole in the middle (1.5mm diameter) providing only minimal air for the combustion. This will have to be automated, if an electric starter can be realized somehow.