There seem to be a couple of ebay auctions, selling TA2020 amps and the sellers seem to have put https://apollo.open-resource.org/mission:tech:odyssey:audio into the description. Those auctions are in no way affiliated with Apollo-NG. Please be aware of that, someone just put the URL to our wiki in there, it has nothing to do with this project.

Considering all the voodoo and insane prices so called “High-End” audio systems introduced to the simple art of listening to sounds/music with the best possible signal reproduction result, it was quite a surprise to find solutions, that would only cost a fraction of “High-End” systems, have a virtually linear power-consumption to usage ratio and sound equally well, maybe subjectively actually even better. Over the course of 3 years a lot of Audio-Enthusiasts have been sitting here and were always mesmerized by the clarity, dynamic and stage perception, these two setups produce.

Traditional Class A,B,A/B amplifiers simply are no option, since they burn too much power by design and need more than 12V, to produce the necessary amount of power to properly control the drivers.

Class D amplifiers offer a more linear power-consumption to usage ratio, when no signal is there to amplify, they draw less than 100mA and when you crank the signal up to -6dB a 15W rated Class-D amp will consume about 15W electrical power. However, many currently available and tested approaches didn't sound “High-End”.

In 2011 the TriPath TA2020 and TA2024 Class-T amplifier chips were acknowledged in many HiFi-Boards and usergroups worldwide, which started a run on cheap and economical devices that had a reputation to offer unimagined quality, compared to $5000 “High-End” systems.

There are three factors that determine the output quality of these devices:

The best performance can be achieved by using these devices in a low-power/mobile environment, running for hours of a small 13.8V lead battery or even a 4S LiPo Pack. 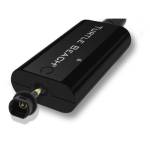 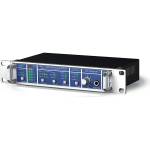 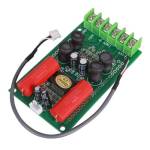 Arjen Helder came up with a solid Tripath Class-T design for the TA2020 and the TA2024. Both can be used with a single 12V power supply and draw a maximum of 2A, to cover peaks in the power usage (more bass needs more power), idle current is 60mA and normal power consumption at medium volume is between 300mA - 600mA.

When looking at the datasheets it was obvious that audible distortion would kick in as soon as the level reached more than 50% of the rated output of the amp, which really makes the TA2020 a 2×12.5W and the TA2024 a 2×7.5W amplifier. However, continuous tests over the last 10 month of daily usage showed that even these levels were never reached since it would have been just too loud.

If you want to get these modules, a search for “helder hifi” will direct you to the appropriate ebay shop.

There is also an alternative source from Deal Extreme: Jtron TA2024. The layout seems to be a copy of the helder-hifi (or the other way around) and although a lot of GND vias are missing, a direct comparison played rather equal so you can get it really cheap now :) 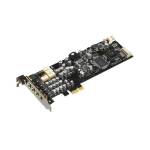 Low-Pass chebychev on dc power input + ferrite choke to reduce EMI may help in noisy env's like this setup had to suffer from.

The original red caps were replaced by very expensive Mundorf silver/oil caps, the price of each cap greatly surpasses the price of the whole amp. Unfortunately, this seems like a complete waste of resources, since no audible increase in sound performance could be perceived, so you can just comfortably stick to the original red ones, without the need to test/optimize there.

The following power supplies have been tested in order to get a feeling which ones are usable, which ones sound really good and which are no option at all:

Well designed TriPath amplifier modules, like the Helder-Hifi products, offer a superior sound quality for the lowest possible amount of power, which makes them ideal candidates for mobile/battery powered environments. Not to mention their really affordable prices. When you consider the following basic rules of usage, you will get the best possible overall result:

In a direct comparison between the two setups, Test Setup 1 (TA2024) subjectively sounds even more dynamic, has “more boom” and a very wide/deep stage presentation (even with less than 10W) than the TA2020, however it's hard to say if this is due to the quality of the RME ADI-2 at the beginning of the signal chain or a superiority of the TA2024 over TA2020. This should be tested as well, but that would require more time to set up and will only be possible if Apollo is finally on the road and operating independently.