There are often reports about breakthroughs in alternative technologies and when I look, I can find charts claiming that in 2014/2015 top solar conversion efficiency is reported to be at about 45%. However, when I look harder I don't seem to find obtainable Panels above 21%. The highest grade I could get were the Mobile Technology MT-ST110 panels on the odyssey. I can't help but to ask myself: 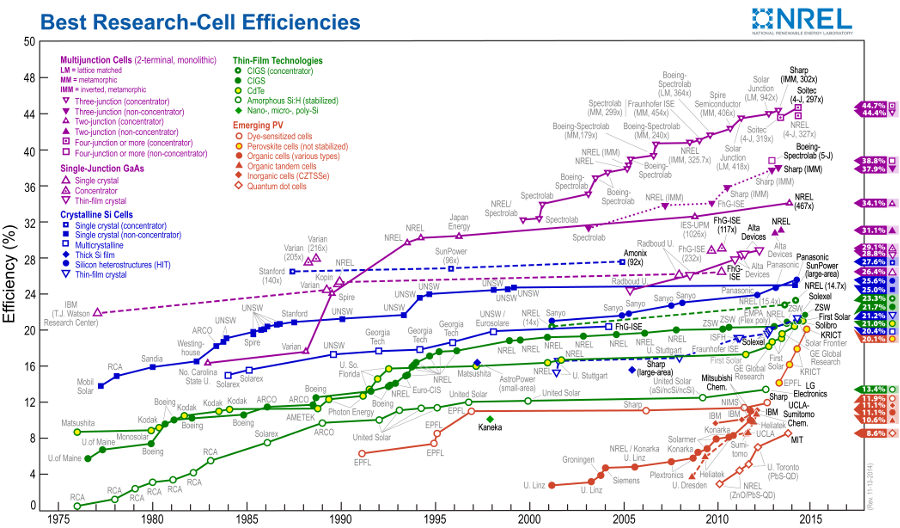 Now, a couple of researchers with interdisciplinary and seemingly non-related backgrounds published the concept to apply a quasi-random nano-structure to a solar (PV) cell in order to increase the absorption of photons (decrease reflection) and reported an overall broadband absorption enhancement of that solar cell to be 21.8%, when a Blu-Ray land/pit pattern is applied.

From the little info publicly available, it seems they've just tried different materials for this approach and discovered that Blu-Ray's compression algorithm (tested with Jackie Chan - Police Story 3: Supercop) creates a favorable quasi-random array of lands and pits (0s and 1s) with feature sizes between 150 and 525 nm, which seems to work quite well for light-trapping (photon management) applications over the entire solar spectrum.