Leave it to the Chinese, to come up with good quality products, completely unavailable anywhere else, for a really awesome price. After 3 weeks of waiting, the collet-chucks (ER11 & ER16) for the picocnc spindle finally arrived directly from Hong-Kong: 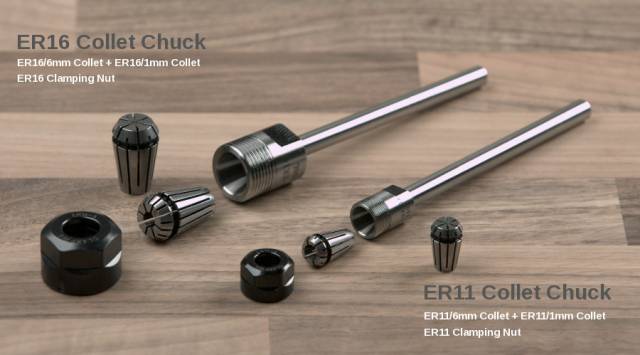 There are a lot of ER11 and ER16 collet-chucks out there, so what makes these one so special? Simple: These ones come with an 8mm shaft, which is going to be inserted as a drop-in replacement for the 8mm motor shaft of a 5045 class brushless outrunner.

After a preliminary review, the first prototype will be built with the more massive ER16 collet-chuck, since the threading will probably survive longer and the collets also seem to be more heavy-duty than the ER11.

If it works and all other parts play equally well, it should be possible to build a robust and precise enough power spindle for a CNC router/gantry system for less than 100EUR. It might also be an attractive option for other Hackerspaces and FabLab's who are building CNC routers as well.