The Illuminator - A LED Light built from trash

Building things can be a lot of fun. Even more so, if the parts you use are things, that other people threw away. A while ago, the workbench needed a more appropriate lighting and 3 Luxeon 1W LEDs were lying around in the MISC box, other parts were collected from trash found in containers. 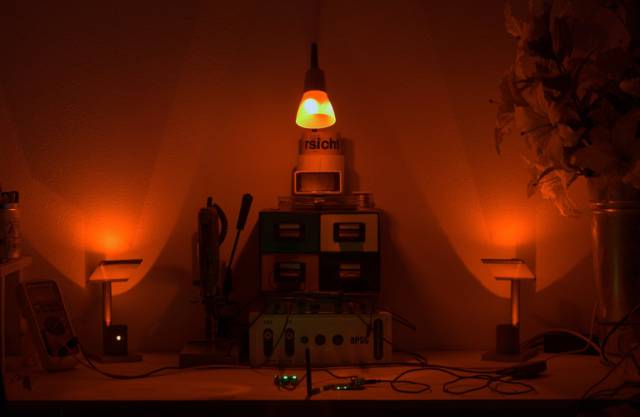 Before building a few ground rules were established: 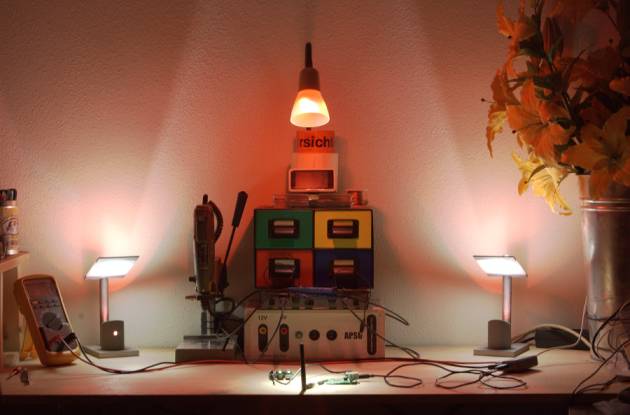 Obviously LED's were the only choice for the defined power budget. Unfortunately, LED's have a rather directional light that tends to dazzle when you look directly into the emitter. After sifting through available materials and some trash sites a clearer image of what to build came up:

A system based on 3 components, one central directional spot to illuminate the working area and flank it with two “bouncers” that soften the light like it's done in professional film/photo productions. Light is something you can play with, form it and give it character, just they way you want it to appear.

The central element used to be a “reading lamp” on a common uplight where all parts were removed to make room for the 1W LED and a ring of 3 120° LED's placed 120° apart to get a full circle, mounted on the rest of a PET bottle neck. The satined glass prevents any dazzling from within. The flexible arm is mounted on a wood plate.

The bouncers base is also a wood plate, the vertical column is a 20mm white PVC pipe used for electro installations, the bouncer itself was made of broken plexi/acryl glas and the bigger tubing around the emitter is 50mm grey PVC pipe used for plumbing to prevent dazzling from the emitter.

Both images are only here for reference, since there wasn't enough time to go HDR on the photos. These images only vaguely represent the way the lighting is perceived by the human eye. The light on the workspace with 3.5W is far more bright, than with a 60W lightbulb which has to illuminate the whole room from the center, instead of the area, where the light is really needed.

In the following pictures you can see the emitter unit at the bottom as well as the second red led in the bouncer during construction, before the bouncer was glued in place and the effect color was sprayed onto the setup. 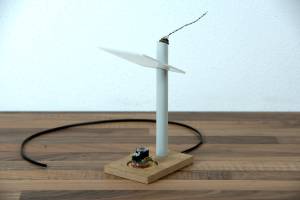 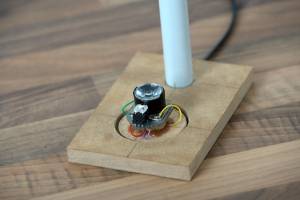 There won't be any more technical details about this setup since the idea here is to be creative with what you've got. This was only posted on request, as the question came up, how one can safe power with lights and still have something beautiful and useful.